Given the historical links and interconnectedness of the world’s two biggest economies – the European and the American – it is almost startling to find the number of diverse barriers and legislative impediments that complicate the mutual commerce, making it impossible to use the potential advantages of a common market.

This has inspired the current initiative which seeks to achieve significant progress in liberalizing the foreign trade of the European Union (EU) and the United States of America (USA). The emergent treaty is referred to as Transatlantic Trade and Investment Partnership (TTIP) – a free trade zone between the EU and the USA.

Slovakia with its pronouncedly export-driven economy can be among the countries that profit most from TTIP. This is one of the reasons why Slovakia should not remain a passive onlooker in negotiations on specific issues of the transatlantic partnership. In an effort to strengthen the voice of Slovakia’s entrepreneurs and the professional public in negotiating the contents and final version of TTIP, Business Alliance of Slovakia (BAS) has implemented with the US Embassy in Bratislava a special project “TTIP – Transatlantic Trade and Investment Partnership: A Unique Opportunity for Corporate Growth in Slovakia (?)“.

The project featured, among other things, a questionnaire survey of the transatlantic partnership’s impacts on Slovakia’s economy and business environment that sought to identify what opportunities and threats would the prospective deal bring; 453 entrepreneurs participated in the survey.

More than a half of the respondents assume that a single market deal between the EU and the USA would bring new business opportunities and help boost Slovakia’s economy. According to the entrepreneurs, the most pronounced contribution of the transatlantic free trade agreement should be a higher number of business partners, a more intensive foreign trade and a simpler transfer of know-how and technologies.

The dominant optimism of entrepreneurs towards a common EU and US market is reassured by answers on TTIP’s risks. The list of risks is shorter than the list of advantages; in comparative terms, the entrepreneurs perceive the different threats as less pronounced than the advantages. The most frequent concern is more intense competition on the marketplace, which, while beneficial for the economy as a whole, may at the same time reduce profits or even undermine the viability of some businesses. An efficient measure to compensate the risks of more intense competition, which the Slovak government should decidedly not underestimate, is, in BAS’s view, improving the business environment.

Entrepreneurs who have participated in the survey expect that the existence of a transatlantic free trade zone and removal of trade and regulatory barriers will have a beneficial impact on their revenues (expecting an average 17 % increase of revenues) as well as on the economy’s employment rate. Eighty-nine percent of the responding entrepreneurs are convinced that liberalization of trade will improve employment; the average rate of expected change in the number of employees was +7.8 %1.

The TTIP impact analysis on Slovakia’s economy and business environment indicates a 2.57 % increase in corporate revenues, 1.19 % increase of employment rate (i.e. 27,652 new jobs), 3.10 % growth of exports and 2.93 % growth of imports. The expected growth of cross-border trade is 3.02 %. Further to these growths, a GDP is expected to grow at roughly 3.96 % to 4.22 %. Accordingly, TTIP’s contribution to Slovakia’s economy could amount to as much as 3.6 billion euros (1,743 euros per single household).

Slovakia’s potential to profit from TTIP’s benefits depends largely on the competitiveness of Slovakia’s economy. Slovakia has its own positive experience with entering the European Single Market in 2004. The range of customers serviceable without the need of overcoming national barriers has been extended from 5.5 million to 500 million with a now fiercer competition between Slovak and European producers while the latter have gained barrier-free access to markets of Central and Eastern Europe. Shortly after the country’s entry into the EU, Slovakia’s economy experienced one of its most stellar periods, with its increasing economic growth hitting an all-time high of 10.4 % in 2007. This success of Slovakia’s economy was not generated solely by the country’s joining the EU. Its fundamental prerequisites were substantial reforms of the business environment that boosted the competitiveness of businesses, i.e. their ability to succeed at the marketplace. The actual entry into the EU’s trading space was but a catalyzer of the following economic success.

TTIP: A Unique Opportunity for Companies in Slovakia To Grow (analysis) 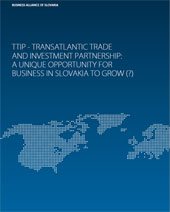